Chapter Officers
Elected officers must own an operating licensed and insured motorcycle.

Chapter President
1.Elected head member of the chapter
2.Chairs chapter meetings
3.Appoints officers as needed for operation of the chapter

Chapter Vice-President
1.Elected second in charge member of the chapter
2.Assumes head of chapter when President is unavailable
3.Performs tasks assigned by President for operation of chapter

Chapter Treasurer
1.Elected officer
2.Documents and tracks financial accounts of the chapter
3.Performs tasks assigned by President for operation of the chapter

Chapter Sergeant at Arms
1.Appointed by chapter President
2.Keeps order at chapter meetings
3.Controls communication to President from outside clubs and chapter members when requested by President
4.Performs tasks assigned by President for operation of the chapter

Chapter Webmaster
1.Appointed By Chapter President
2.Assists in operations of chapter Media, including website and other media outlets.
3.Preforms tasks assigned by President for the operation of the chapter


Elections
1.Nominations for elected office are open on December 15th. All Nominations are given to the Chapter Secretary. The Chapter Secretary      will announce the nominations on January 2nd in our PCLLRC private group. All current elected officers have nomination for the following  year. Voting will be held at the January Meeting. Any member not able to attend, will be responsible for reporting their votes to the Chapter  Secretary before the January Meeting, or be counted as abstain.
2.Any full member motorcycle owner can be nominated for office
3.Elections are held at the January meeting
4.Full member cast one vote
5.Majority vote wins

Membership Requirements
1.First year membership Requirement. Include a $50 fee. New members shall complete a 6 month probationary period. They will be expected to attend one half of the Chapter meetings during that period. There will be a vote for approval into the Chapter. Majority vote wins.If not voted in the $50 fee will be returned. After the completion of probationary period they are eligible for a back patch. After first year Annual Dues consist of $20 and are due at January meeting for full members .Membership dues shall be paid before by March 1st or considered lapsed.
2. Members who allow their membership to lapse and wish to rejoin shall be considered New Members
3.Family members are welcome but are not allowed to cast vote unless they have paid a full membership dues.
4.Full membership is open for non-riders but they may not hold elected office
5.First year's membership dues include choice breast patch or tshirt
6.Back Patches are available for purchase for full members for $25, But Must be returned upon exit of the Chapter.

Code of Conduct
1.All members will represent Pearl City Life Riders RC without Detriment.
2.Any member found in violation can be removed with a majority vote of the chapter elected officers. 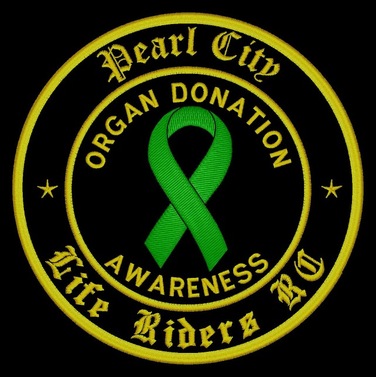